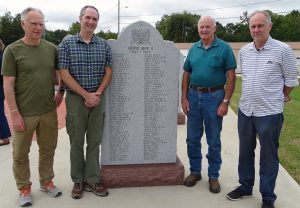 Rupert Watson, left, Tom Blake, Phil Blake and David Watson, along with others, met Sept. 19  at the New Gloucester Veterans Monument to see the inscription for the Watsons’ uncle, a British WW II pilot in the Royal Navy who perished over the skies of New Gloucester during training maneuvers in 1943.

Tragedy struck over the skies of New Gloucester’s Intervale region 75 years ago.

On Oct. 3, 1943, British pilots Lieutenant Commander Alfred Jack Sewell and Sub-Lieutenant David James Falshaw Watson took off from Brunswick Naval Air Station to practice training maneuvers. Apparently one plane came up under the other, causing a collision that resulted in the deaths of both pilots.

The plane crash occurred over the meadow behind Everett Stinchfield Blake’s farm on Penney Road. Blake’s son, Phil, presented this story to his fellow members of the New Gloucester Veterans Monument Committee, who decided that the two WWII British allies deserved to be recognized on the town’s Veterans Monument.

On Sept. 19, Phil Blake’s son, Tom, presided over a gathering of the three members of the Watson family, plus 20 New Gloucester Historical Society members and local dignitaries to honor pilot David James Falshaw Watson and present the trio with memorabilia from the monument’s dedication ceremony in 2014.

For Patti Mikkelsen’s complete column in the Lakes Region Weekly, go to http://news.keepmecurrent.com/inside-new-gloucester-152/