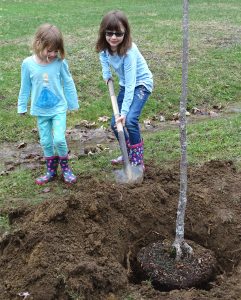 Serenity Klotzle, 7, who belongs to the New Gloucester Public Library’s 4-H group, covers the root ball of a newly planted Liberty Elm tree that she named “Elmie” on April 29. Her 5-year-old sister Haven looks on.

The image of majestic elm trees arching over the streets of our hometowns changed significantly in the 1930s when Dutch elm disease decimated the elm population. Because of efforts by the nonprofit Elm Research Institute, disease-resistant trees have been developed. They have been given the moniker of the American Liberty Elm — named for the “Liberty Tree,” our country’s first symbol of freedom. The institute established its Liberty Tree Society program in 2009, and of the hundreds of thousands elms they have planted, 99 percent have survived.

New Gloucester Public Library purchased an elm from the Liberty Tree Society in Keene, New Hampshire. Trustee Robb Cotiaux traveled there to pick up the tree for planting, and he along with library 4-H member Serenity Klotzle installed the sapling on April 29. “Elmie” can be visited behind the gazebo and swing set.

For Patti Mikkelsen’s complete column in the Lakes Region Weekly, go to: http://news.keepmecurrent.com/inside-new-gloucester-142/