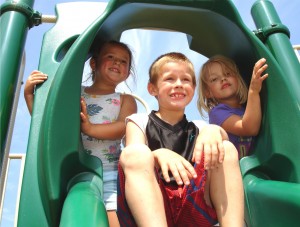 Children in the area now have another recreational option – a playground located at the New Gloucester Fairgrounds, 106 Bald Hill Road. The facility is open during daylight hours and closes at dusk.

The town’s Parks and Recreation Committee, headed up by Director Harvey Price Jr., devoted many years to the planning process, from the financing, including a federal grant, to erecting the equipment. The playground project finished up on Aug. 10.

“We had a great group of volunteers who put in significant hours. Some are on the Parks and Recreation Committee, some aren’t. A few don’t even have kids or grandkids. They were there because it’s a community project,” Price said.

Another undertaking at the fairgrounds is building a pavilion. Price estimated that the framework should be in place by the end of August, and volunteers will be sought for a community build of the roof afterward. Once the pavilion, which is adjacent to the fairgrounds, is done, hopefully in mid-September, there will be a ribbon cutting/grand opening to showcase the two projects.

For Patti Mikkelsen’s complete column in the Lakes Region Weekly, go to: http://news.keepmecurrent.com/inside-new-gloucester-119/