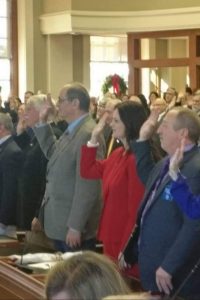 The swearing-in ceremony was very much a family affair, with toddlers wandering around the front, the Speaker of the House’s daughter playing the violin for the national anthem, and one legislator standing and saying “present” with her adorable twin daughters in her arms.  Maine families are the glue that binds this state together and I am proud to serve the families of New Gloucester and Poland.  As legislators, we need to set an example for our children of civility, restraint, responsibility, and kindness.  Much was said at the ceremony of the need for the parties to work together, and I couldn’t agree more.  The attitude of those in attendance was one of camaraderie, and I am optimistic that it will last.

We did, however, have one close call.  As Troy Jackson, the Senate President and a former logger, hammered his gavel near the end of the day, a large splinter broke off and flew over half of the state Senate! Thankfully, nobody went home in bandages.

May you have a joyous Christmas and a prosperous New Year!