How to Get Rid of Brown Tail Moth Caterpillar Nests

This is the time of the year to check your yards and surrounding areas for brown tail moth webs. Destroy the webs now. At this stage, they do not cause an allergic reaction as they will later in the season.
A video on how to destroy the nests at this time of the year may be viewed on the internet at the Maine Forest Service web site. Enter Brown tail moth in the search box.

The browntail moth is an insect of forest and human health concern which was accidently introduced into Somerville, Massachusetts from Europe in 1897.  By 1913, the insect had spread to all of the New England states and New Brunswick and Nova Scotia.  Since that time, populations of this pest slowly decreased due to natural controls until the 1960’s, when browntail moth was limited to Cape Cod and a few islands off the Maine coast in Casco Bay. Browntail moth populations persist on islands and in coastal areas in southern Maine, extending up the river valleys.
Browntail Moth Risk Map (pdf | 2MB) The larval stage (caterpillar) of this insect feeds on the foliage of hardwood trees and shrubs including:  oak, shadbush, apple, cherry, beach plum, and rugosa rose.  Larval feeding causes reduction of growth and occasional mortality of valued trees and shrubs.  While feeding damage may cause some concern, the primary concern is the impact on humans from the browntail moth is the result of contact with poisonous hairs found on the caterpillars.  Contact of these hairs with human skin causes a rash similar to poison ivy that can be severe on some individuals. 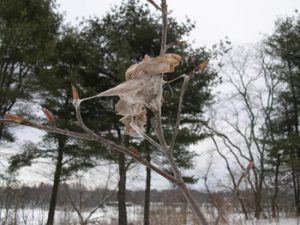