Demonstration and Pollinators’ Garden at the New Gloucester Fairgrounds

Plants that pollinators’ (various types of bees, butterflies, birds) love have been planted with trees, shrubs and perennial flowers. An emphasis was made to plant as many native plants as possible and more will be added at a later date. The plants bloom at various times to provide food most of the year for the pollinators.Those planted are deer and drought resistant, require minimal care and are readily available to purchase. No invasive plants were used.

Plants are labeled with their scientific name as well as their common name.

Initially a soil test was done to determine which organic amendments should be added to promote optimal growth of the plants. Since the garden is in front of the water district buildings to provide screening for the buildings, only organic compounds were considered. Lime was used last fall and soybean meal was used as a source of nitrogen when the individual plants were added in amounts specified by the soil test.

An additional part of the demonstration garden is to show which types of ground covers used under the mulch work most effectively in deterring regrowth of weeds. Five different types were used in different areas of the garden: cardboard, newspaper, landscape fabric, cotton sheets, and plain mulch.

Watch this garden grow and consider planting many of these same plants at your home.
New Gloucester Environmental Resource committee
8/13/16 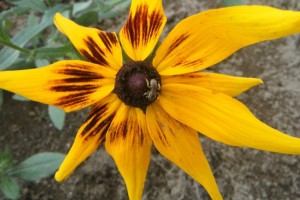 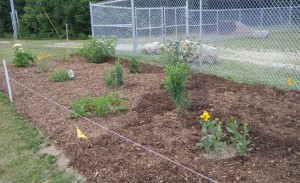