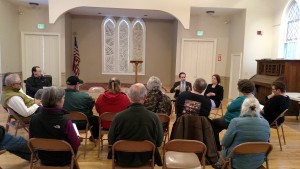 The chance to talk with State Representative Ellie Espling drew some twenty New Gloucester residents to the Congregational Church vestry in the early evening on April 5.  State Senator Eric Brakey, newly announced candidate for U.S. Senate, was able to join the gathering, a lively ninety-minute exchange of views and concerns.

Healthcare concerns dominated the conversation. Residents shared personal experiences and expressed a wide spectrum of viewpoints about alternative approaches, costs, and coverage issues.  In particular, community members wanted to know whether the two legislators support Medicaid expansion in Maine, a likely ballot initiative this fall.  On the matter of citizen ballot initiatives generally, residents asked how the representatives typically approach citizen-approved bonds and ballot measures and how they weigh the expressed will of the voters.  Other questions sought the legislators’ positions on proposed cuts to Clean Election funding, whether campaign funds from PACs should be spent within Maine, and what the state should increase spending on.

Briefly stepping back from specific issues to offer a broader view, Representative Espling and Senator Brakey acknowledged partisan differences in Augusta but noted considerable cooperation as well, with many bills enjoying unanimous support in committees and on the floor. Their New Gloucester meeting concluded on a similarly positive note. Attendees thanked Representative Espling and Senator Brakey, and the legislators expressed appreciation and plans to convene additional community listening sessions.