Unfortunately,  a member of the Tricky Britches Band badly hurt his hand and the band will not be able to play tonight. BUT Caroline Cotter has very graciously agreed to step in and play  for us. It’s a very special treat to have Caroline join us tonight on short notice – particularly as she is just passing through her home town of Portland as she continues her world and nationwide tour.
You hear it over and over, “Don’t quit your day job!” but that’s just what Caroline Cotter did at the start of 2015 when she released her national debut album, Dreaming as I Do.   Receiving national recognition, the album reached #5 on the Folk DJ charts in February, with the second most played song of the month, Bella Blue.
Since the album’s release, Caroline has been on the road touring non-stop throughout the US and Europe, playing over 200 shows a year in venues from Club Passim in Boston, MA to the Alberta Rose Theater in Portland, Oregon. She has shared the stage with Loudon Wainwright III, David Wilcox, and Dan Bern, played festivals including 30A Songwriters Festival in Florida, Joe Val Bluegrass Festival in Boston, Al Ras Festival in Barcelona, Grey Fox Bluegrass Festival in New York, and showcased at the Northeastern Regional Folk Alliance Conference as well as the Southeast Regional Folk Alliance Conference. 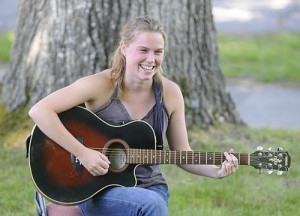